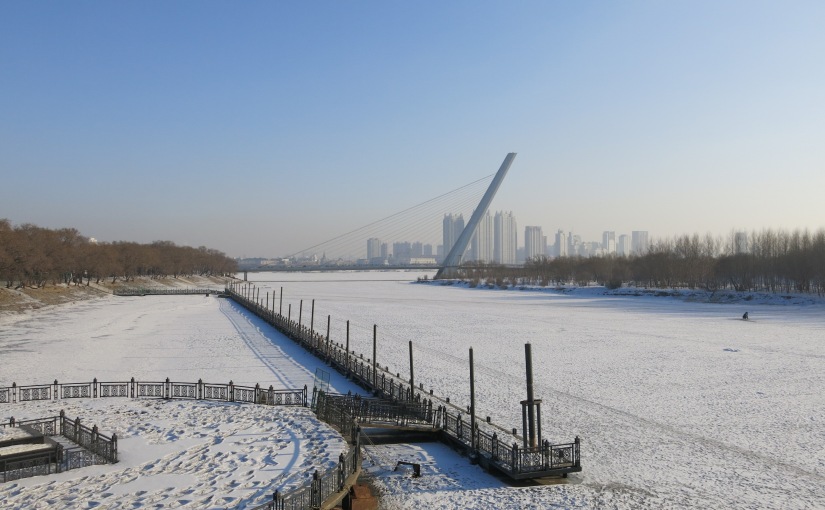 When a friend and I decided to visit the city of Harbin, China last month, T said it was because I wanted to experience a little more winter.  It has been a rather odd season in Shenyang.  January brought two to three days of 32F followed by two to three days of 15F followed by much of the same.  Weird.  I’d worn my lighter weight down coat for two months while so many were suffering a polar vortex in the US.  For Harbin, I pulled out the heavy duty Lands End coat and the trusty (original pair of) Merrell boots, a few layering items, some hand warmers and the camera, then S and I hopped on a train and headed out.

Located at 44 degrees North, Harbin, or Ha’erbin, China is famous for the annual Ice & Snow Festival, celebrating 30 years in 2014.  We began our tour with a stop at Sun Island Park for the Snow Sculpture Art Exposition.  Many artists create works of snow in this wooded park, the detail and size of which I find difficult to believe, and I’ve seen them twice in the last few years.  We spent the afternoon there, and were even treated to a special show.  You can check it out here at http://www.youtube.com/watch?v=uFgwynmz1yI.

We moved on to Ice and Snow World.  This year, there were many models of churches and church themes.  The largest monument was modeled after a church in Reykjavík.  There were Gothic archways and pagodas and more.  I am so glad we saw them in the afternoon sunlight and in the LED-filled evening hours.  The sculptures were gorgeous as well.  We went later in February and, with a “warm” winter, we could see some rounding edges on the various displays.  That didn’t take anything away from the view for me.

On Sunday, we hired a taxi to take us around the various sites, including the Siberian Tiger Park, the Temple of Bliss, the Pedestrian Street, then back to the train station.  We were lucky to have a beautiful weekend in Harbin, not too cold, but a nice, winter experience.  You can check out CNN’s coverage, http://www.cnn.com/2014/01/03/travel/harbin-ice-festival-2014/, and get my view too.  Enjoy.

In January 2011, we went with new friends to Harbin (Ha’erbin), China for the annual ice and snow spectacles.  This is a four hour train ride north, into the tundra and the sub-Siberian plains.  To put this in perspective for you, Harbin is at about 45 degrees north latitude, on par with Green Bay.  Thankfully, we just missed a bitterly cold weekend, and arrived instead when it was a balmy -4F and a wind chill of -20.  When I asked Tim what he was going to wear for the trip, he said, “Everything.”

Harbin is on the Songhua River (now frozen in a gorgeous Rockwellian vision, http://www.youtube.com/watch?v=HGqx4Er68t4) and is linked by rail to Vladivostok and the Chinese port city of Dalian.  The Russian influence is obvious, including architecture that resembles any European walking street rather than a Chinese city.  The Church of St. Sofia was built in 1907 in the Byzantine style complete with onion domes and clay bricks.

Specifically, we went to Harbin for the Ice and Snow Festivals, and they did not disappoint.  Artisans from all over the world start in October to create these amazing structures.  The snow sculptures were peaceful and huge.  The ice palaces were like a Siberian Vegas, http://www.youtube.com/watch?v=-3RJ75b6f2U.  We also visited the Tiger Park, where they are saving Siberian tigers through preservation and breeding programs.

Through the weekend, we saw many amazing sites and people, ate some great food, and survived the cold wearing everything plus an extra pair of socks.