There were quite a few authentic and traditional Chinese dishes we had to try when we went to Xi’an.  We did our very best to eat our way up and through the Muslim Quarter.  Some things, we had to try more than once or twice, just to give it a fair shake.

Rou jia mo is like a Chinese hamburger on a flatbread-type bun.  Every one of the 4 I tried (ha!) was fantastic, and the spicy vegetarian version (cai jia mo) was fantastic too.  Biang biang mian is a carbohydrate dream – wide, thick, long hand-pulled noodles in a sauce of varying spiciness.  Yang rou chuanr is a lamb skewer and at each stall, there are different spices available for you to add your own.  Cumin is a regular favorite.  There were sweet rice cakes, nutty candy, fried little potatoes, noodles, fruits and vegetables, drinks, nuts, breads and so much more.  Enjoy!

And there you are 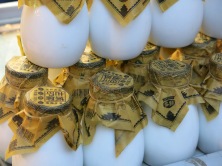 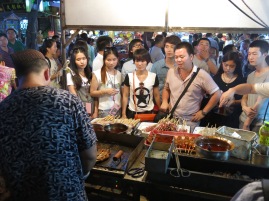 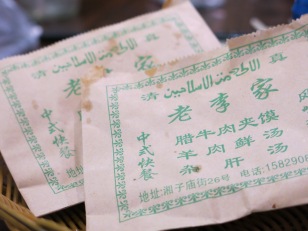 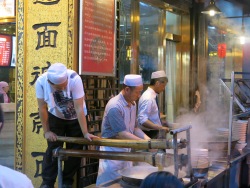 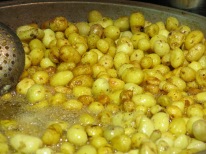 Is it only emperors who can build themselves an army?  My friend, the talented potter / highly educated chemist, can she build herself an army of ceramic cats to protect her from unseen forces?  If I buy enough souvenir Eiffel Towers and display them in organized columns, will they come to life and become my garde militaire?  Seems like reason enough to buy another Eiffel magnet.

Last month, I had the fortune to travel to Xi’an with friends.  It was a whirlwind weekend of seeing and tasting, laughing and thinking, being with people full of love.  It was a weekend of armies, history, emperors, relics, food and a little more food, and plenty of photos.

Xi’an, located in the heart of China in Shaanxi Province, was home to 11 dynasties over a period of 4,000 years.  Nearby is the Banpo site, home to a village in the Neolithic period, 6,000 years ago.  Xi’an was the farthest eastern destination of the Silk Road and the first capital of a unified China more than 2,200 years ago.   Today, it is home to 14km of intact city walls, pagodas, the Terracotta Army, and, in my opinion, one of the best history museums in the world.

In 1974, 3 peasant farmers were digging a well and came upon the tomb-guarding warriors of Emperor Qin Shi Huangdi.  Little did those farmers know that there were three pits and more than 7,000 life-size soldiers, archers, officers, horses and chariots.  Each one was once colored with pigment and had a weapon, and they all have an individual expression on their face.  Huangdi knew how to build himself an army for his life after death.

The Shaanxi History Museum is an eye-opening experience.  Not only can you see the terracotta soldiers up close, but you can see thousands of relics from the varied history in this province.  On special exhibit while we were there were relics discovered inside two large pots.  Again, a Shaanxi farmer was digging for something and found Tang Dynasty treasures instead.  This museum is amazing and the displays are very well done.

I’m not sure I can choose just a few photos for this blog post.  Keep an eye out for more on the food in Xi’an.  Enjoy. 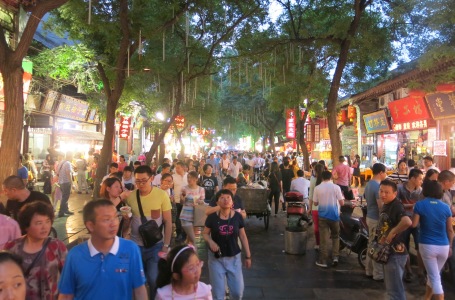 Close your eyes and clone yourself.

Build your heart an army.

To defend your innocence

while you do everything wrong.

Don’t be scared to walk alone.

Worry, why should I care?